Well I used to think that Wakefield Park was a fair old trip to have a run on a race track but turns out it’s a short distance compared to driving to “Winton Motor Raceway” in Victoria.

With both my logistics managers Tai & Jason tied up with work commitments it was left to me to do the driving on my own ( I usually sit in the passenger seat & enjoy the scenery).

The “Team Hunter” contingent left about 4.30am in the morning with the first stop approximately 30 km out of Goulburn. The good news was we still had about 5 hrs driving to go. The next stop for me was Albury and by that time “Max” the D Max towing vehicle was like me on a Friday arvo getting a bit thirsty so a quick fill with diesel & we were on our way again.

We arrived at “Winton Motor Raceway” at around 2.30pm & were greeted by the friendly Winton staff whom then showed us the layout of the complex. We were then able to unload the race cars & get them into the Pit garages before driving into Benalla to find our accommodation. Finally a pub for dinner where the ribs were great but don’t tell Steve Jones. Wednesday morning was cloudy & there were a few spits of rain just as we arrived at the track. Would it be another wet track day? Fortunately the clouds cleared & no rain for the rest of the day.

The day was being run on a “GEAR” format but instead of the groups being named after old racetracks they were named after old air strips that were used for Motorsport events in the old days in Victoria.

A total of 37 cars competed on the day of which 12 were from NSW. Austin Blanch & I competed in a group containing sports cars as well as tin tops. The first session was practice, unfortunately we didn’t get to drive on the longer national track but drove the 2km club circuit which was physically demanding & kept you on the ball. One of the older Super car drivers apparently said that Winton was like doing a race in a supermarket car park & I now understand what he meant.

Austin’s “A” decided to stop & was towed back to the pits with a suspected fuel pump issue. After further investigation we found that the rotor button had failed. Robert was doing a walk around the pits to try & find a rotor button then I remembered that I’m pretty much like anyone who has fitted an electronic ignition in a MG in that I carry the complete old points dizzy with me! So rotor out & into Austin’s “A” then all good with problem fixed & Austin was back on the track. He was doing some quick times & getting quicker as the day went on with having a good tussle with an XU1 Torana in the last two sessions. He finished up taking out fastest time of the day for our group.

I was lowering my lap times by around 0.5 sec each session and also finished up third in the last event. Thanks to Matt & Tim Blanch for their help on the day monitoring tyre pressures after each session, I found Matt’s advice helpful & I felt that I learnt a lot on the day.

Thanks to “Winton Motor Raceway” for a great days Motorsport with also a big thanks to Lisa Tobin-Smith ( Minister for Midweek Motorsport) With thanks also to the Victorians who organised what will hopefully be the first of many Victorian “GEAR” days. I would definitely go back for another run at Winton as I thought it was a great little track with good surface & very challenging to drive on.

Remember drive them don’t hide them. Enjoy your MG, I know I do. 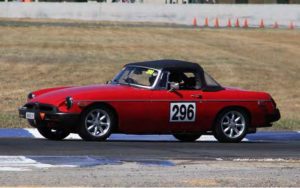