Around the bend – the ravings of your President.

What’s old is new again. See the attached photo and remember the old days. In those days,

the electric cars were reliable (though not common) and almost all packaging was recyclable.
Now days, with the proliferation of electric cars coming into our lives, I don’t know if we’ve progressed in life. I hope they are more reliable than my phone. It’s on 80% battery life, then you make a call and three minutes later it is suddenly on 25%. Two minutes later it shuts down with no battery left. I can see the advantage for an around town car, but there is nothing proposed that can cover the Australian distances whilst towing a load. They always quote recharge times but that is banking on no one else being on the charger when you want it and there being no line up for the charger.

I was at the dental surgery the other day and was reading their latest motoring magazine. I learnt that Ford UK is stopping production of the Ford Cortina and were introducing a new car called a Sierra and MG were releasing a new version of the MGB called the MGRV8. Wow, I felt like I was 20 again.

Welcome back to the club rooms. It was great to see members back in our club’s home. It has been quiet for over a year now with only our committee meeting breaking the silence. Remember to book in if you want to attend. Numbers are still limited by law. We will be allowed to sing and dance. Who has a good MG song (Wheelin West Virginia, Montego Bay, Short skirt long jacket or yes, there is even two songs called MGB-GT) and what would be an appropriate dance?

One MGB-GT song by Peter Tork starts:
‘Lately my mind is drifting back,
To former days that used to be.
I think about some folks I knew and of my MGB-GT.
People let me tell you that if I had to make a recipe,
For fun in driving I would have to spell it MGB-GT’.

The other by Richard Thompson song is about his BGT restoration. It’s the ‘mistress of his heart’ and finishes nicely with:
‘An Alpine's fine if you've got the time,
And a Healey'll set you back some,
TR4 cost a little bit more,
But it don't have the same attraction,
Hard top handy case of the weather,
I don't care if it rains forever,
MGB-GT’
Look them up on YouTube (links in the article above).

I got an interesting email from a member the other day looking for a spanner or socket for doing up the rear hub nuts on their MG. I spent many years frustrated, trying to do this job without massacring both the nut and my knuckles. They are supposed to be torqued to 120 ft/lb. That is… VERY very tight, and the nut is only a few millimetres thick. Not very conducive to easy loosening and tightening.

I have searched for years to find a socket. Gary Boote made a socket to fit but you couldn’t torque it (just a big bar). The hard part is when you get up to this size (1 15/16”), they are mostly hexagon in shape (6 sided). The hub nuts are octagonal (of course 8 sided and not rounded like the modernized MG symbol). A lot of people use a cold chisel to undo them leaving them totally butchered and you still can’t torque them correctly.

So, after much searching on and off over the 40+ years I’ve owned my B, I finally found one. If anyone needs to borrow it, give me a call. I even have a torque wrench with a ratchet so you can torque up both the right and left hand threads. Oh, that is the other trick. Can’t undo it, you’re probably turning it the wrong way.

On the MG usage side, I went to Wakefield for the HSRCA Autumn meeting in late March. There will be a report elsewhere in the Magazine but needless to say, the decision to spend an extra $195 (over the $440 entry APRIL 2021 13 fee) on a garage was worth every cent. The Weather Bureau had forecast another major rain event and every day on the lead up, the forecast was getting worse. I even knocked back a couple of deployments for flood rescue to the north coast over that weekend. It was a sign. Ahhh, us city blokes were happy with a drought.

On the plus side, and credit where it is due, I sent a scanned copy of my signed off competition licence to Motorsport Australia for my full licence upgrade on the Sunday night when we got home. Just before 10am the next day my full Clubman Circuit licence was on my Motorsport Australia app. When I get the Midget out of the trailer to do a clean-up and maintenance, I’ll finally remove the P plate!

On that point, all I have to do is maintenance. Change of oil and filter. YESSSS! No oil leaks. Even the oil mist I’ve always had through the interior from the gearbox has been fixed. Oh happy days!

I mentioned last month how people outside of our club read our magazine on line. I was chasing an original style steering wheel for Bev’s Midget and within a few days of ‘On the Marque’ being published I got a call from Canberra with an offer. Alas the wrong shaft size. This month was similar with a call from a gentleman whose son I used to compete against in Regularity. A steering wheel will be forthcoming at the next race meeting in Sydney. If you are buying or selling, I think that it’s great that the wider MG fraternity can enjoy reading our Club’s magazine. It widens the market.

That’s enough from me. If you want to come to the April Club night, please let our Editor Graham know. Numbers are restricted still. I’ll have a video of a lady driver to show. Caroline Grifnée passed away recently at the age of 40. She was a race team manager in Europe and one hell of a driver in her own right. Come and watch her drive a very wet race in an historic Ford Escort. It is truly mind blowing.Another recent lady that is a monumental loss to motorsport was the “Queen of the Nurburgring”, Sabine Schmitz. She had done more than 30000 laps of the ring and was a true legend. She passed away at age 51 from cancer.

Please, be good to one another. Take the time so say hello with a smile. The person you’re chatting to may really appreciate it. 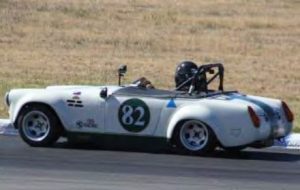